The Kaid-Sanders Best Political Communication Article of the Year Award

Every year the ICA Political Communication Division awards the best article published in our field. The award will be given based on nominations using the following criteria: 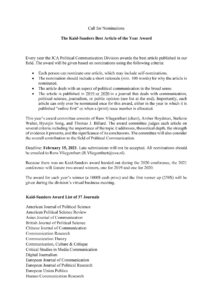 The award for the winner (a 1000$ cash prize) and the first runner up (250$) will be given during the division’s business meeting.

2020 – Benjamin Toff and Antonis Kalogeropoulos, “All the News that’s Fit to Ignore: How the Information Environment Does and Does Not Shape News Avoidance,” Public Opinion Quarterly, 84(S1), 366-390. [Publisher]

2009 – Keren Tenenboim-Weinblatt, “Where is Jack Bauer when you need him?” The uses of television drama in mediated political discourse,” Political Communication, 26(4), 367-387. [Publisher]

This award, begun in 2013, is for the best dissertation in the field of political communication during the previous two years.

The nomination package should include:

The ICA division chair appoints members with the advice of the APSA chair, and the committee receives nominations and generates additional candidates, deliberates on the pool of potential awardees, and makes a selection. The winner receives the award plaque at the annual business meeting of the ICA Political Communication Division. The award is given in even-numbered years.

Nominations for 2022 will open soon.